Come senators, congressmen
Please heed the call
Don’t stand in the doorway
Don’t block up the hall
For he that gets hurt
Will be he who has stalled
There’s a battle outside ragin’.
It’ll soon shake your windows
And rattle your walls
For the times they are a-changin’.
Times They Are A Changing
–Bob Dylan 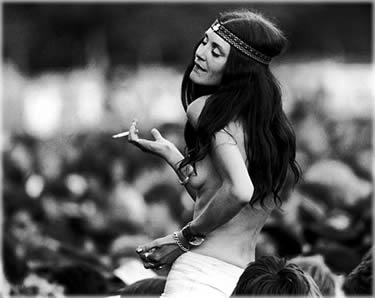 Saturn and Uranus oppose each another in a clash of Titans, reminding me that I wore flowers in my hair in Golden Gate Park long before the Summer of Love, feeling the energy dance on my skin like fireflies sparking off light. That was before the drugs went bad and the ghetto-fires raged, before the snipers loaded their rifles and St. Ronnie the Reagan told us that hippies looked and smelled like Cheetah, before the establishment decided that kids were the enemy, before the churches began to howl about taking back American values. Even when it all went viral, the air was electric with purpose and determination. And while this isn’t the Summer of Love, Part Deux, perhaps it’s the cynic’s version.

Those were days when we had supreme confidence both in ourselves and in our ability to impact the world. We believed in the vote, in the Constitution and the American system of checks and balances. We had respect for science that took us to the Moon, and medicine that gave us the first heart transplant. Television was benign, and news still showed actual pictures of war deaths and protests against them. We gave a slight nod to militarism at its leanest and meanest, but considered Vietnam an egregious example of exploitive empire building. We cracked open politics to get a good look at its dark underbelly. We marched through the haze of tear gas and threats of baton-wielding cops to make our voices heard. Our American Dream was more about freedom’s potential than its actuality, even as we took advantage of the liberty that citizenship provided us. We had no idea how good we had it. 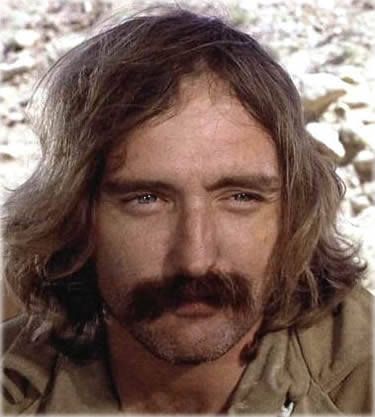 
A strong union movement protected worker rights, and America was still hard at work manufacturing goods in our mobile, industrialized society. Education was affordable, creditors didn’t own us yet, our roads and bridges were sound, and gas cost 35 cents a gallon. News of Dennis Hopper’s death this week brings with it memories of those free-wheeling days, before the interstates made Route 66 obsolete and adventure beckoned everywhere we looked. We couldn’t imagine a future ‘over 30,’ and had only the slightest understanding of the resources we depended upon. The West was increasing its energy use by 5% annually, oblivious to international issues that would quickly change the trajectory of politics for the foreseeable future. The late ’60s set in motion a series of events that seem uncomfortably familiar today, two in particular.

In 1967, Israel launched the Six-Day War against Egypt, Jordan and Syria. Ultimately, Israel — with American approval — expanded its territory, occupying the Sinai Peninsula, the Gaza Strip, the West Bank, East Jerusalem and the Golan Heights. In 1973, Egypt and Syria struck back in what was called the Yom Kippur War. Nixon came to the aid of the Israelis. The Arab oil organization known as OPEC found a new weapon with which to punish the West. They raised the price of crude by 70% and cut production to the U.S. in what quickly became an oil crisis. Tricky Dick responded by sending more emergency funds to Israel, triggering an oil embargo that escalated recession/inflation well into the 1980s and changed the nature of Western energy policy. We paid a very high price for our ‘democratic’ toe-hold and access to the Mideast; we still do. It’s taken 40 years to admit the truth and we still can’t decide how we feel about it.

Back then, we were busy pumping whatever oil the lower 48 had to offer, but the 1960s saw the decline of easily-produced domestic crude. We were already drilling off-shore, which brings us to what some consider the birth of the ecological movement: the Santa Barbara oil spill of 1969. Union Oil was the culprit in that disaster, taking more than 11 days to cap a blowout six miles off the coastline. 200,000 gallons of crude spread into an 800-square-mile slick, driven by wind and rough seas well into Northern California waters. Dolphins and seals died grim deaths, and gray whales changed their migration route to Baja breeding grounds to avoid the dark waters. Seabirds took the brunt of the spill; early rehabbing efforts were inexact, and some species dwindled to a few hundred. The event made Earth Day a national movement in the year that followed, beginning America’s love/hate relationship with the oil industry. 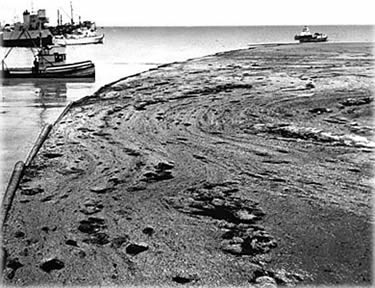 On the afternoon of January 29, 1969, an environmental nightmare began in Santa Barbara, California. A Union Oil Co. platform stationed six miles off the coast of Summerland suffered a blowout. Oil workers had drilled a well down 3500 feet below the ocean floor.


The cause of the Santa Barbara blowout was — surprise! — inadequate equipment. Union Oil had been given permission by the U.S. Geological Survey to cut corners and bypass federal standards. A bit more steel sheeting would have prevented the rupture. Neither safety standards nor arrogance have changed much in 40 years. Said Fred Hartley, president of Union Oil at the time, “I don’t like to call it a disaster because there has been no loss of human life. I am amazed at the publicity for the loss of a few birds.” After the hole was plugged with cement, residual amounts of gas continued to escape, and another leak was later discovered that fouled the waters for months.

Union Oil Company — now Conoco-Phillips — ranks 16th on current lists of companies by revenue, while BP ranks 4th, although its stock is dropping quickly. When we were only a few days into the current spill, the nation seemed pragmatic, willing to tolerate the disaster in order to meet future energy needs. But now the Drill, Baby, Drill mantra has become Spill, Baby, Spill. More than half of us have doubts about off-shore drilling, a number that will increase daily if researchers’ projections about the spill continuing until Christmas prove true. By then the undersea results of this tragedy will be even more apparent. Perhaps we will change our minds about petrochemicals now.

In the 40 years between the Santa Barbara spill and today, we’ve been sleepwalking. During the 1960s, we knew that big corporations had too much power over our lives. We fought Dow Chemical’s and Monsanto’s production of toxins like Agent Orange. We knew the military-industrial complex had grown too big for its britches, so we burned draft cards and refused to fight their war. We knew that energy problems were already dictating international adventurism and began exploring alternatives. And we knew, as Dylan reminds us, that Congress was blocking the doors and hallways. The assassinations, economy and years that followed wore us down and left us cynical and lethargic. We let the good times roll unexamined, and expected technology to save us. We bought the proposition that things outside of us were more important to civilization than the truths we carried within us. 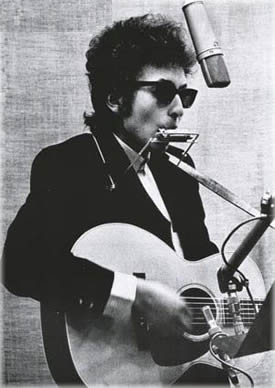 Bob Dylan (born Robert Allen Zimmerman; May 24, 1941) is an American singer-songwriter and musician. He has been a major figure in popular music for five decades.


But we knew, didn’t we? The piper would eventually need paying.

In hindsight, the curse is obvious: the status quo is no longer affordable. Were the Tea Baggers the improbable equivalent of the hippies, this would be called the Summer of Hate. Their protests are less political than personal. It’s Obama they detest, not the darker powers that influence the establishment. Warming deniers and Republican outliers, they are uninterested in the wounds to the environment. It’s a supreme irony that their leaders are the same generation that viewed me and mine as godless little heathens who needed eradicating and did all they could, including a bogus war on drugs, to achieve that end. As it dawns on us that the established order is no longer sustainable, Tea Baggers become increasingly superfluous to mainstream solutions.

The next revolution will be fueled by realism. Uranus’s repressive sense of claustrophobia still bubbles under the surface, and the more Saturn pushes its old solutions, the more rebellion we’ll see. Change is a given now, and we don’t go though such a process unless it’s time to grow beyond our present structure. This shift is not new business, but follows generations of accrued awareness. It’s shaking the windows to our soul and rattling the walls of our consciousness, asking us to draw that line again. If we put away our fear, we’ll recognize familiar energy and feel the excitement and potential of the moment. What some see as a painful ending is actually a bright beginning, if we allow it to be. And isn’t it time, now, to finish what we started? Freedom’s potential still awaits.